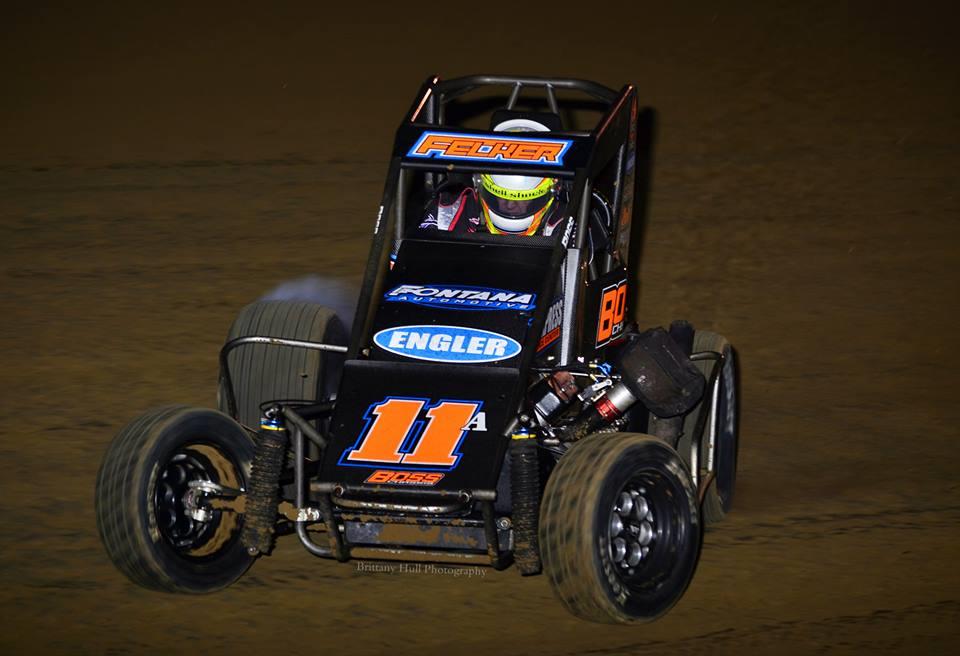 “It feels good, especially being back at the track where I grew up,” he said. “That’s where I ran every week for the first three or four years of racing micros.”

Felker, who estimated he had earned 40-to-50 micro sprint victories at the bullring, kicked off Saturday night by advancing from fourth to second place in his heat race.

“I went to the top in turns one and two on the start and got to second,” he said. “I tried to reel in Tyler (Thomas) for most of the race. I got to him on the last lap, but ran out of time to do much.”

That lined Felker up on the outside of the third row for the 25-lap main event.

“I jumped up to the top early,” he said. “The top was real slick to a pretty good-sized ledge. You had to be really careful because the car wanted to bicycle.”

Felker quickly advanced into second place before he started searching for a way to drive around the leader.

Felker took the lead just after the midpoint of the race as he cruised to his second straight victory. It marked his third win of the season.

He is scheduled to race this Thursday through Saturday at Tri-City Speedway in Pontoon Beach, Ill., during the Gold Crown Midget Nationals with the USAC Honda National Midget Series.

Thursday through Saturday at Tri-City Speedway in Pontoon Beach, Ill., for the Gold Crown Midget Nationals with the USAC Honda National Midget Series

Here is a video by i Race TV of Felker’s POWRi West victory at I-44 Riverside Speedway on Sept. 20: http://youtu.be/5V4UcDt4ZfI?list=UU2I713gCnnZ6fhqgdb9ssOA

Felker has t-shirts for sale at each of his races. To view his race schedule, visit http://www.AndrewFelkerRacing.com.

Located in Brownsburg, Ind., CSI Shocks, a.k.a. Competition Suspension, is a leader in the shock industry within short-track racing. Since its inception in 2009, drivers using CSI Shocks have won more than 500 races. For more information, visit http://www.CSIshocks.com.

“Since we’ve gone to the CSI Shocks program it has stepped things up with our program,” Felker said. “Since they came out with the RS-X2, it’s been a key to our success all year.”