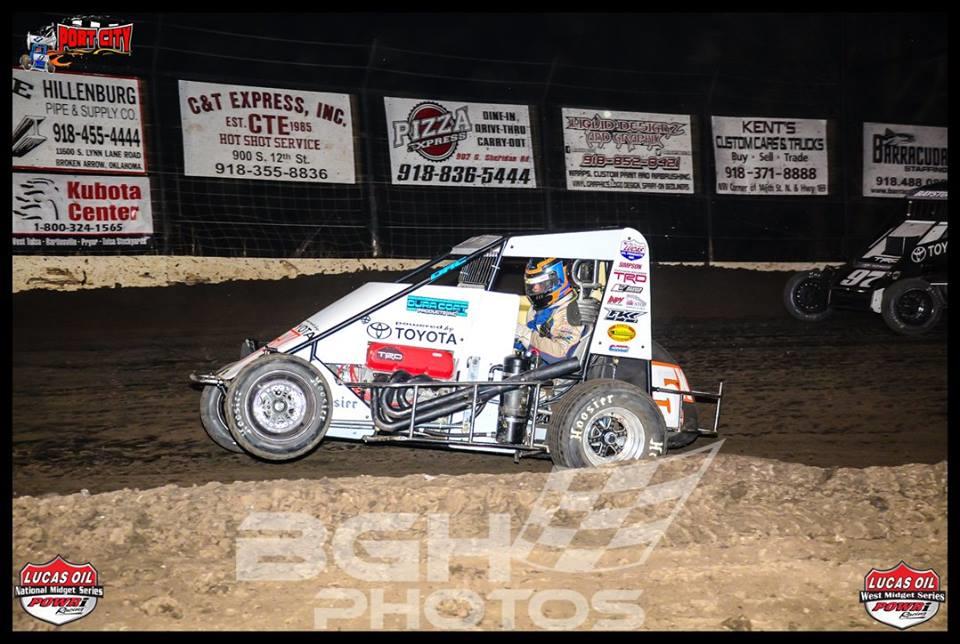 TULSA, Okla. – Last March, a trip to Tulsa was not kind to Justin Peck. This time around, the Monrovia, Ind. competitor made up for it. Peck went into the “Turnpike Challenge” at Port City Raceway with high hopes, and came out with two top-five finishes against over 50 tough contenders in the POWRi National / POWRi West Series co-sanctioned event.

To be exact, 52 midget entries attended the pit area for the two nights of action. A handy pill draw on Friday put the Dura Coat Products No. 5x on the pole of heat two (of seven). Peck quickly went to the top shelf and used the high side for all ten laps to earn the heat victory.

The downside of starting pole was that passing points would not come into play for Peck, and he’d be relegated to 12th for the feature lineup. Slowly but ever so steadily, the 17-year-old mustered his way through the field on the tiny eighth-mile oval. Three yellow-flag periods and one red helped Peck keep the field close. Passes for position early were later bolstered by simply keeping his nose clean around the inside line, and in the late going, he found himself sneaking up into the top five as the checkered waved.

On Saturday, though he wouldn’t start from the pole of his heat, the result would be the same. After being the quickest of the 52 cars in hot laps, he’d line up from third in heat three and go on to win it.

A higher passing point total on night two put the Toyota-powered DRC Chassis third on the main event grid, for 40 laps and $4000 to the winner. The top five starters all raced valiantly in the early laps, with Peck taking over the second position on lap four. Nearing the halfway point, opposition came from former Chili Bowl preliminary winner Jonathan Beason, as well as charging local Jason McDougal from the tenth spot. Though McDougal would later be out of reach, Peck battled hard with Beason as well as Andrew Felker for the position. Peck moved back by Beason to regain the fourth spot, and clicked off laps late in the event to collect his second top-five in as many nights. “I tried knocking the cushion down for too long,” Peck reflected. “But I’ll take the two top-fives this weekend!”

Peck is next scheduled to compete on April 8-9 at Kokomo Speedway in Kokomo, Ind. for the “Kokomo Grand Prix” with the USAC National Midget Series in the No. 5X midget entry.