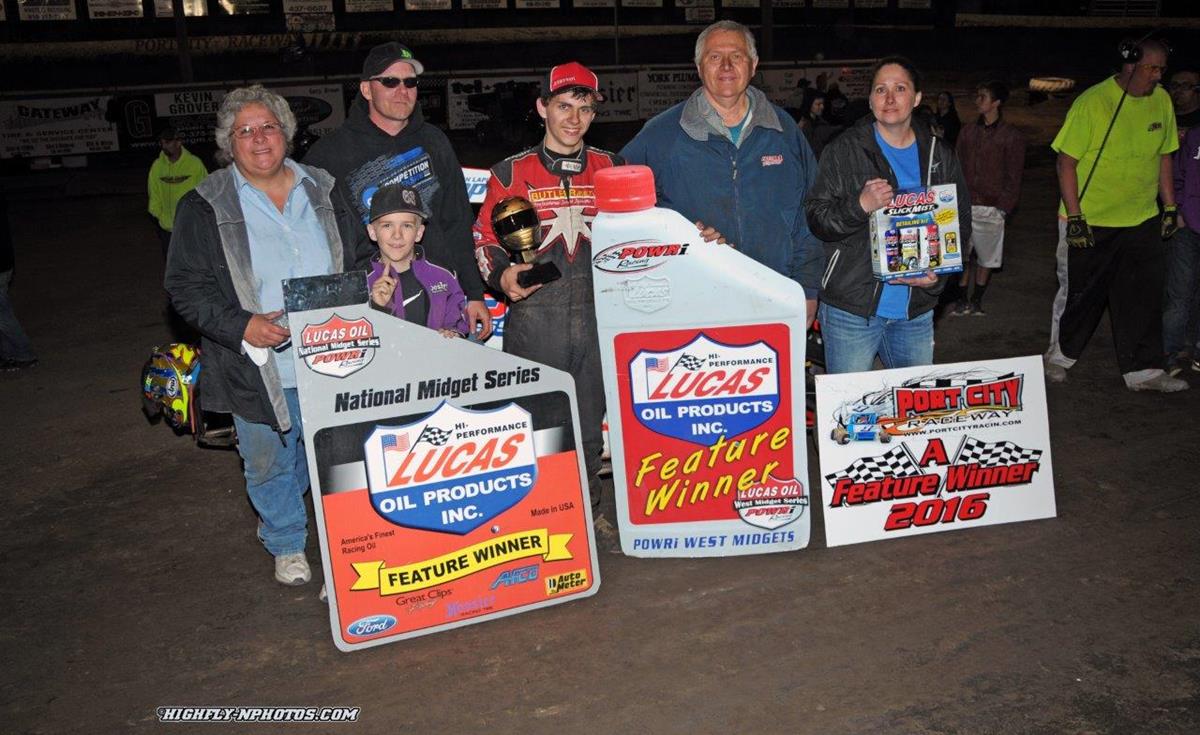 Leading the field to green, Logan Seavey would start from the pole position with Tanner Thorson to his outside. Heading into turn one, Thorson would take the lead with Seavey in tow. On lap three, Justin Peck would work into the mix and slide for second just as the caution would fly for Seavey atop turn two. Returning to green flag racing, Thorson would power off with Peck close behind, only for the yellow to fly again two laps later for Holly Shelton on the front stretch.

Coming back to green, Thorson and Peck would both take to the high side as Jonathan Beason made his way into the top three. On lap 11, Beason would move past Peck, sliding for second entering turn one and taking the position off turn two. As Beason looked to be catching Thorson, the yellow would fly for Austin Shores caught on the berm in turns one and two. Returning to racing, Thorson would take off with Beason in striking distance only for the yellow to come back out for Tucker Klaasmeyer and Harli White in turn two.

With Thorson out front, Jason McDougal would apply pressure right from the restart on Beason, taking the second position off four while Andrew Felker pressured Beason for third, eventually taking the position off turn four, as well. On lap 15, Harli White would bring out another caution as her machine sat disabled on the back stretch with a broken front end.

On lap 35 Austin Brown would slow off turn four bringing out the caution. McDougal would again be in a prime position to strike and coming back to green he would pressure for the lead as Felker stayed close to the two drivers. On lap 38 Holly Shelton would loop it on the berm in turn two, bringing out the final caution of the evening, creating a two lap shootout to the finish.

Thorson would lead the field to green, only for McDougal to dig deep and slide for the lead entering turn three to take the lead off turn four. Heading into one, both drivers would dive to the bottom side as McDougal worked to protect the position. Going into three and four for the final time, contact was made, but it wasn’t enough to keep McDougal out of victory lane in front of the hometown crowd. Tanner Thorson would bring home second as Andrew Felker rounded out the podium. Justin Peck would improve one position from the night before, bringing home fourth, while Zach Daum finished out the top five after starting 13th.

“That took everything I had to hold him off,” said first place finisher Jason McDougal. “I’m speechless. I’d been struggling coming off three and four, so I knew I couldn’t fully commit, but I knew I was going to throw it. This is amazing, doing it in my hometown and to have everyone here supporting us to do this.”

“That was one hell of a racetrack,” Tanner Thorson said. “This promoter puts on an awesome race. Congratulations to Jason McDougal. I tried my hardest to get by him and it didn’t work. This is his track. He deserves this.”

“We had a good car,” explained Andrew Felker. “Early we were picking them off in a hurry and then Jason drove by us like we were stupid. He had the car of the field. He was flying down on the bottom early. I knew the slider was going to be interesting on the last lap, but I just wasn’t close enough to capitalize on it. Standing on the podium is not a bad way to end the night.”